Inspiring Testimony : The Courage to Challenge the Impossible – Talk by Antonio Meloto, Founder of Gawad Kalinga

In this talk Mr. Meloto talks about his poor up brining and his aspirations for wealth in his younger years and the realisation that giving to charity did not repair the underlying problems which were keeping people in poverty. He tells us about the struggles he faced. A truly inspiring talk from a humble man who shares his vision of a future of hope.

“How do you how do you start how to enter the world of the poor? I came from the poor but I’d  forgotten about them. I could not even  blame the rich for not being  compassionate it seems, because I came from from the poor but but at a certain  point I didn’t want to be like them. Despite the worldly success I had and even my own spiritual journey it was simply because I was living a country that had no excuse to be poor”

Antonio Meloto is the founding father of Gawad Kalinga – a movement that builds integrated, holistic and sustainable communities in slum areas, through an integration of philanthropic and social entrepreneurship initiatives.

GK has supported over 1 million people to rise out of poverty and is internationally recognised as an “Asian solidarity movement for sustainable development”. Gawad Kalinga is now being implemented in more than 2,300 communities in the Philippines and in other developing countries such as Indonesia, Cambodia and Papua New Guinea.

It has become a concrete manifestation of the healing of relationships in the Philippines, bridging the gap between the rich and the poor, government and private sector.

If you would like to make a donation https://www.gk1world.com/home# 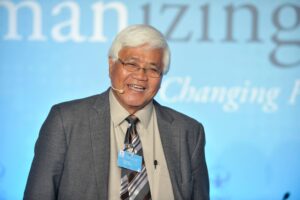 Antonio Meloto
PrevPrécédentWarrior of the human spirit – Margaret Wheatley: Human experience is the story of perseverance
SuivantFlair is in the air – A revolutionary innovation saves 85 percent of energy.Next