Manfred Max-Neef, Father of “Barefoot Economics” – How to move from the current crisis to a stable economy?

In his opening remarks Manfred Max Neef  made a brutal statement:

“I believe that neoliberal economics which has conquered the entire world, backed by most politicians and corporate people is killing more people than all the armies put together”

…after which  he went on to give figures and facts to back this claim. He refers to saving the banks after the 2008 crisis as scandalous as it cost the world 17 trillion which he calculated could have fed the world for 600 years and now goes on to ask where that money is. His consternation is evident when he explains that this money could have been used to eradicate the hunger which still plagues humanity. He is aghast by the context in which we live, where human tragedies such as high suicide rates in certain countries due to the economic climate (2010) have been reduced to mere macroeconomic indicators.

Questioning the very idea of modern economics which has been confused with the acquisition of wealth and power, he voices his increasing concern that sustainability and its different approaches, interpretations, indicators and strategies is the result of the way in which economics has evolved as a discipline. He outlines the direct correlation between sustainability as a preoccupation and the imposition of the neoliberal ideology of the dominant economic model. After pointing out that sustainability had not even emerged as a concept before the 1970’s he explains Aristotle’s distinction between Chrematistics and Economics (economics meaning the management of the household and chrematistics meaning the art of acquisition)

« What we have today is exactly the opposite of what we call economics. This, in our present world is, in reality, not economics but Chrematistics. Economics no longer exists. Contributions have been made for the reconstruction of economics. Human needs, quality of life, values, well-being, sustainability and the common good are of course inseparable parts of the art of living and living well. Certainly, none of these have any relation to the neoliberal ideology concerned exclusively with growth and accumulation in monetary terms. The reconstruction of economics is a colossal change from what we have. If we want to change something, we must first of course understand the origins of that which we want to change. Neoliberalism, the late offspring of neoclassical economics, has become the political ideology that dominates almost all economic departments in our universities »

A scathing criticism of the current teachings and apathy of Universities ensues and then he goes on to describe how, through different schools of thought and the reverence of the acquisition of wealth, we have now turned word economics into a more unethical neoliberal form starting almost a century and a half ago in 1870 when economists made it a case to demonstrate that economics was a science just as Newtonian physics was.

After giving us a brief history outlining the journey economics has taken, mentioning different theories from economists such as Lèon Walrus (Swiss – French 1834-1910, author of Elements of Pure Economics), Thorstein Veblen (American 1857 -1929, author of The Theory of the Leisure Class) and the post-Keynesian Austrian school of thought, he explains how, in the 50’s, students like himself were exposed to the possibilities of multiple perspectives when analyzing economic problems and went on to deplore the fact that courses such as Economic History and History of Economic Thought have now completely vanished from all curricula.

Accusing Universities of having simplistic views and going along with a “poisonous” neoliberal doctrine, he notes that the 2008 – 2009 scandal didn’t seem to bother mainstream economists, who still control the immense majority of economics departments, in the slightest and wished they would at least recognize and confess to the inadequacy of their theories.

He believes that the economics education we should be teaching has been replaced by a neoclassical, fairy-tale, market-centered form of economics indoctrination void of government, ownership, regulation, corporate accountability, building codes, health and safety laws, collective bargaining rights, food standard controls, oligopoly and monopolies, welfare or any Public Health Department.

“This must come to an end of course, because economists trained according to these fantasies end up being like idiots among geniuses when playing with mathematical symbols but are totally ignorant about the real world in which they live, and to continue promoting a poisonous ideology disguised as science is suicidal”

His proposed solution would be to awaken economic departments at Universities and urge them to encourage multiplicity of economic visions thereby enabling students to make the right choices and gain the necessary creativity to understand the realities of our new century. We must move away from this mainstream thinking which currently resists change and views any attempt to break this neoliberal wall as subversive, towards more intellectual plurality and freedom.

Manfred Max Neef then discusses what scientific truth actually is and quotes Max Planck before giving us some insight into how he and colleagues introduced to the Principles of Human Scale Development and its Human Needs Theory in 1986 (Published by Dag Hammarskjöld Foundation). He passionately describes his surprise that not only was the work popular among alternative groups but to what extent the peasant populations of South America welcomed it.

« We were really astonished when we realized that the original Spanish version became, in those days, the most photocopied document on the continent. We used to arrive in Andean communities to be approached by local leaders with a photocopy of a photocopy of a photocopy, almost unreadable, ready to discuss whether their interpretation was correct and whether their project satisfied the philosophy of human scale development. It was moving to witness how such marginal communities adopted the principles and designed development projects that conventional experts would have been unable to conceive”

He iterates the lessons learned such as: the language of Human Scale Development and its Need Theory could easily be understood by simple people; that no true development can succeed without the understanding participation and creativity of the people themselves; and that what mobilizes common people does not necessarily mobilize academics.

What took the peasants almost no time to understand, he concludes, took about 15 years for Human Scale Development to generate interest at the academic levels.

“Now the Human Needs Theory is recognized as one of the most important contributions in the field. Human needs, capabilities, quality of life and well-being is what people understand – not the obstructions of macroeconomic indicators that have nothing to do with real life! Development is about people not about objects and not about money. The fact that once again we are willing to rediscover and respect human feelings and the value of all manifestations of life means that a better world is possible and in a way it feels like a fascinating voyage back to the origins (of economics) so, why not finish this presentation with a little Aristotelian dream – let us imagine that economics becomes again the manner of managing the household in order to achieve the art of living and living well. Respecting the right of all others to achieve the same and within the limits of the carrying capacity of our planet.

Thank you very much”

There is another 14 minutes of very interesting Q&A on this video and we can only encourage you to treasure this as much as we do.

Manfred Max-Neef was a Chilean-German economist in the field of international development. He sadly passed in August 2019 in Valdivia at the age of 86.

His most important books are: “From the Outside Looking In : Experiences in Barefoot Economics” and “Human Scale Development” originally published by the Dag Hammarskjöld Foundation. Both books seek to counter the logic of economics with the ethics of wellbeing “as if people matter”. His  book: Economics Unmasked” is a profound critique of mainstream economics.

He worked for several UN agencies and between 1994 and 2002 he was Vice Chancellor of the Universidad Austral de Chile in Valdivia. In 1983 he received the Right Livelihood Award (Alternative Nobel Prize). He held honorary doctorates from Jordan, Colombia, Argentina and the United States, and was recipient of the University Award of Highest Honour from Japan. He was the Director of the Economics Institute at the Universidad Austral de Chile. Member of the Club of Rome, the European Academy of Sciences and Arts and the New York Academy of Sciences.

Since his passing, The Manfred Max-Neef Foundation has been launched to continue his work. 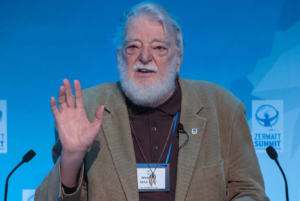 PrevPrécédentTHE CASE FOR GIANT LEAPS
SuivantCoffee Pixels – Special discount -15% with code : Nature15. A call for your help from Gunter PauliNext