On its maiden voyage of 3,200 km between Tokyo

(Japan) and Kaohsiung (Taiwan), MS Porrima demonstrated that sea transport and fishing is ready for a fundamental energy transition. A sector known for burning heavy polluting fuel has now a proven competitive alternative.

This first international voyage of the Swiss MS Porrima delivered a key proof of operation: solar, wind and hydrogen beat all power systems for ships in cost, technical performance and reliability. The next 10,000 miles will finetune how a mix of renewables facilitate novel business models.

The name Porrima is derived from a Roman deity, who was revered as the Goddess of the Future, protector of pregnant women. The ship has a challenging agenda: deliver proof of operations for a dozen technologies demonstrating their performance on an odyssey around the world.

The first proof of operations is the solar system. MSPorrima is equipped with 516 square meters of solar panels, and 8 tons of lithium batteries. The maximum charging capacity with full sun is +100kW. The two electric propulsion engines consume 15 kW, 25kW facing headwinds and currents. Six hours of sun suffice to advance at 5 knots for 24 hours at 10 km/hr. While this may seem slow, it accumulates in 240 kilometers per day. At that speed you circle the world in 200 days, exactly as MSPorrima has done – it is the first ship ever to sail around the globe with solar only.

The world record took 2 years, much more than 200 days. As we learn quickly at sea, everything depends on the weather: without sun, batteries run out of power in 2 days. That’s why the ship added kite power from SkySails.

A kite catches wind at 170 meters altitude and pulls the boat at 10 knots, double the speed of electric engines. The coordination between wind and solar offers an independent energy mix. When the kite pulls the propellers reverse and generate power. If the sun shines at the same time then the batteries fill within a couple hours.

The unfolding experience on this 100 tons 36 meters experimental ship demonstrates that for short periods there is an huge excess of energy. Usually, no one bothers to capture it. Since too many batteries are too heavy for a ship, hydrogen is an ideal power storage. Many claim that hydrogen is expensive when other sources are available. But, when energy is abundant and for free it create an energy resilience for all adverse weather conditions. MSPorrima is the first hydrogen ship that took the bold step to integrate its own hydrogen production on board from sea water powered by excess electricity. While a small number of vessels have hydrogen on board, it’s delivered to the ship. MSPorrima makes it at zero energy cost from a most abundant source on earth: sea water.

The result is that the MSPorrima has three complementary energy sources. This mix never fails whatever the weather. If it ever where to fail then there is still a biodiesel generator on board that could deliver electricity in extremis.

The proof of operation is convincing: only working with solar, wind and hydrogen covers all the ship’s energy needs at a comfortable speed of 10 knots! Experts’ analysis of thousands of miles of sailing, suggests to reduce batteries to only 4 tons, to increase size and radius of the kite, and to strengthen the performance of hydrogen. This new mix, coordinated with true Artificial Intelligence more than doubles the speed of the boat securing a high performance over large distances: one day this vessel will sail around the world in 80 days.

The discovery that there is much more energy available than originally considered opens a window to integrate additional technologies that deliver unique services never considered for ships before. MSPorrima is owned by Blue Innovations S.A., a Swiss company dedicated to realize moonshot technologies. A quick review identified two revolutionary technologies to be added on board: fishing with air bubble nets and removing nanoparticles of plastics from sea water.

Everyone knows we are overfishing. However, there is a more fundamental problem – we are fishing females with eggs and kill them. This does not make any sense. As of 2023 MSPorrima will be the first vessel fishing with air bubbles, just like dolphins and whales do, only catching males, securing reproduction liberating all females. Then, MSPorrima wishes to clean up errors of the past. A novel technology inspired by the way lungs remove CO2 from our blood -known as microfluids- removes nanoplastics from the bottom of the sea. The first four units will be fitted on MSPorrima.

It is nice to know that an abundance of renewable power offers opportunities to grow a sustainable economy with innovations that change reality better and faster than expected: a great way to start 2022.

Author of The Blue Economy – Report to the Club of Rome translated in +50 languages Chairman of Novamont SpA – world’s leading biopolymer company with 1,800 patents Founder of the MS Porrima – delivering proof of operations of moonshot technologies. 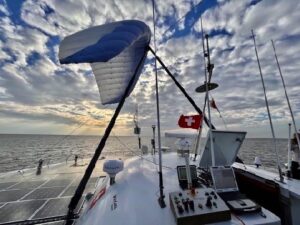