The man who brought back a rainforest

Paolo Lugari has a plan for humanity. And he’s convinced it’s the only plan that will ensure human survival on Planet Earth: We need to plant trees. Many trees!

Lugari’s voice deserves to be heard. In 1967 he founded Las Gaviotas, an experimental village in the eastern savannas of Colombia where nobody thought anything could grow after the Spanish conquistadores cut down the last trees 250 years ago. “They always put social experiments in the easiest, most fertile places. We wanted the hardest place. We figured if we could do it here, we could do it anywhere,” says Lugari, 72.

Today, after 50 years and planting some 9 million trees on 8,000 hectares (20,000 acres), Las Gaviotas sits amidst a reborn rainforest. At the start of the project some 20 species inhabited the lands, now researchers count 250 species, more than in many parts of the Amazon, and that number continues to rise.

We are visiting the village on a cloudy day. As the chartered plane from Colombia’s capital Bogota breaks through the clouds and descends to the grass-covered airstrip we see how Las Gaviotas is surrounded by mostly barren savannas. Lugari welcomes his visitors and leads the tour in an old bus that was saved from the scrap heap, which is being pulled by a tractor, the only vehicle that can deal with the challenges of the wet season.

“For life to continue on earth we need forests to cover 50 percent of the planet. That’s our life insurance policy”, says Lugari from the reversed drivers’ seat.

A 2015 Yale study estimates that there are 3,000,000,000,000 (3 trillion) trees in our world. Forests cover about 31 percent of the world’s land surface. The total number of trees has plummeted by roughly 46 percent since the start of human civilization and we continue to lose some 15 billion trees (0.5 percent of the total forests’ cover) each year.

That’s the trend we need to stop.

There are positive signs. Forests in Europe have grown by a third over the last 100 years. In North America forest growth also exceeds harvest. But the destruction of rainforests in the Amazon, Asia and Africa continues. Painful stories of deforestation include the recent reports of logging in a Unesco heritage site in Poland.

This month the Potsdam Institute for Climate Impact Research published a study arguing that planting trees will not be enough to mitigate carbon dioxide emissions. But in the view of Paolo Lugari that limited perspective on the impact of trees is beside the point. The man who was described by Nobel Literature Prize laureate Gabriel Garcia Marquez as “the inventor of the world” doesn’t talk about climate change, global warming or even carbon emissions, he sees trees as the ultimate benefactors of humankind.

“This is chocolate but it is not chocolate”, Lugari says, when he points at a kind of potato—that indeed smells like chocolate—in one of the nurseries of Las Gaviotas. Then he shows a spinach plant “that’s not spinach” and coffee “that’s not coffee”.

Why don’t you grow ‘real’ coffee, we ask?

With a big smile Lugari says: “These are the plants that the forest has given us.”

And that’s his point. Four decades ago he started planting trees. After carefully studying the local environment he chose to plant the Caribbean pine tree that he had found in Nicaragua. He planted the first seeds in Las Gaviotas but despite all his attention and care, they were all dead six months later. He went back to Nicaragua and when he studied the trees more closely he discovered that the most flourishing pine trees had mushrooms growing at their roots. Lugari decided to mix his seeds with the a “mushroom soup”. That worked. The pine trees grew and began to protect the soil from the tropical sun; seeds that had been buried for centuries came back to life re-creating a rainforest with many other trees, flowers, shrubs, animals and perfectly edible “chocolate,” “coffee,” and “spinach.”

The Las Gaviotas experience shows that trees don’t just take carbon dioxide out of the air, they restore the soil, what Lugari calls “the skin of the earth.” And with that—spontaneously—dozens and dozens of species can come back to life, creating an ongoing positive feedback loop and a self re-generating ecosystem. The roots of all these new trees and plants also maintain healthy water tables—Las Gaviotas now bottles drinking water that is sold in restaurants in Bogota—and the forest cover creates more rain as has been documented with four decades of meteorological data captured onsite.

“Planting trees is an excellent environmental business. Nobody has yet figured out what the ecological value of a tree is. But it’s far more than the combined value of the wood and the capacity for carbon storage,” that’s why, according to Lugari, “there’s nothing more important than planting trees.”

At least in his native Colombia, his call has been heard. Last week the Congress of Colombia passed a law requiring each citizen of the country to plant—and take care of—five trees. The law includes incentives like preferred entrance to higher education for tree-planting citizens (Enforcement of the law doesn’t seem to be a priority in a country that—despite a recent historic peace agreement—is still dealing with substantial law and order challenges).

Colombia’s efforts are a step in the right direction and an example to the world. However, we need much bigger numbers. A back-of-the-envelope calculation looks like this:

According to the Yale study there are 3 trillion trees in the world. They cover 31 percent of the world’s land surface. If we need to bring that to Lugari’s desired 50 percent coverage, we need a total of 50/31 x 3 trillion = 4.8 trillion trees. In other words: We need to plant an additional 1.8 trillion trees. If we do that with 7.5 billion citizens of Planet Earth, each of us has to plant 240 trees—and they all need to survive…

It helps when we change some of our habits. Making paper from trees is an enormous waste—despite the fact that almost all these trees come from production forests. During the visit to Las Gaviotas, Lugari distributes notebooks made from “stone paper” made of calcium carbonate. This is a perfect environmental solution that protects trees and solves the problems of abandoned mines. There are many more creative ways to reduce paper use. Scientific American recently argued that using bidets to clean your underside can annually save 36.5 billion rolls of toilet paper or 15 million trees in the U.S…

But saving trees is not enough. We need to plant new ones. And that’s the art that Las Gaviotas has perfected. The trees are cultivated in a nursery in a soil that’s mixed with mushroom spores. Subsequently the seedlings are planted with a tractor and a specially designed trailer. We witness how two men on a field that has been prepared with some basic ploughing easily do that job. Two men can plant 100 hectares with 1,100 trees per hectare in 24 hours: 92 percent of the trees survive. Lugari wants to give his techniques away: “Anyone may copy our technology. It’s more important to plant trees than that we make money.”

Las Gaviotas’ technology may work in other places. However, Lugari is very clear that each place and each environment requires a specific local approach. During his travels, Lugari has often been asked to replicate his ‘miracle’ in other parts of the world. But his answer to presidents and other government officials has always been the same: “You need your own Lugari who knows and understands the unique local circumstances.”

Still, Lugari maintains that planting trees is cheap and very easy. It doesn’t require degrees, only enthusiasm. He likes to quote his father who told him: “A person with enthusiasm is much more valuable than a Nobel Prize winner.”

“Planting trees is so easy that it becomes difficult to convince people that it’s worth doing”, Lugari says with his characteristic smile. He refers to American president John F. Kennedy who famously said: “We choose to go to the moon […] not because this is easy, but because this is hard…”

Lugari adds: “We have done what’s difficult but we still need to do what’s easy…”

His first dream is to plant the 11 million hectares of barren savannas along the Orinoco river in the East of Colombia to reconnect the country with the Amazon rainforest—as it was thousands of years ago. Then there are 250 million hectares of savannas, similar to the ones around Las Gaviotas, in the rest of South America that can be replanted. That would accomplish about 20 percent of Lugari’s goal to reforest the Earth. Then there’re still five other continents…

“It doesn’t matter where you plant trees. A tree in Las Gaviotas improves the quality of the air in New York,” he says. “The worst desert is in the brain. Lack of imagination is the biggest obstacle. We need to restore the vital signs of the Earth: Vegetation, food, water and air. And we can do so at a fraction of the costs we needed to travel to the moon.”

At the end of the day when our plane takes off from the field Paolo Lugari waves us goodbye amidst the approximately 200 villagers of Las Gaviotas. We try to imagine how he felt when he first came to the place almost 50 years ago. Nothing was there, only the commitment of a man who still dares to dream the impossible dream. The reborn rainforest of Las Gaviotas disappears beneath us and the savannas return. And with them endless opportunities. 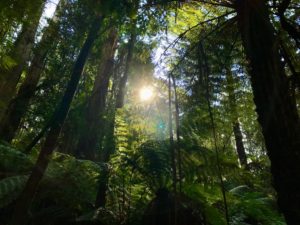 PrevPrécédentThe real challenge is not 5G – but who is datamining? – How countries can leverage their economy with data mining by Gunter Pauli
SuivantJochen Zeitz – The Courage to Redefine Business Purpose – Sustainability as key metrics to BusinessNext