‘I am because your are’ or we are who we are thanks to the relation to others, With Dr. Mamphela Aletta Ramphele

When asked what business innovation the world needs the most on the way to justice for all people and sustainability for the planet, Mamphela Ramphele responds quickly: “The most important innovation is a changed mindset.” We are speaking over a Skype line connecting California with Cape Town in South Africa. “Future success will be determined by a mindset that does not assume that the future is a continuation of the past.”

Dr. Mamphela Aletta Ramphele knows about the necessity of change. She was born in 1947, a year before Apartheid was established in South Africa. She became an activist at medical school as one of the founders of the Black Consciousness Movement with Steve Biko with whom she had two children. Biko was arrested for his protest activities against Apartheid and died as a result of torture in prison in 1977. The death of Biko became symbolic of the abuses of the Apartheid system. Ramphele continued her activism while also completing a PhD in Social Anthropology at the University of Cape Town in 1991, a year after Nelson Mandela was released from prison after 27 years.

As she saw a horrific regime change in the country of her birth, Ramphele is now looking forward to radical transformation in the global economy. She doesn’t see governments or the business sector leading the necessary change. She refers to her experience of fighting political racism: “Throughout world history, change has been triggered by individuals. However, individuals cannot sustain the change if they don’t become catalysts for other individuals to join their causes. Change happens when committed individuals become effective catalysts—in schools, churches, companies or governments.”

I propose that widespread Corporate Social Responsibility (CSR) practices are supporting change for the common good in the corporate world. Ramphele, who served as a managing director of the World Bank from 2000 to 2004, is not impressed. She notes that many multinationals leave their values and ethics behind when they come to developing countries “where the government accountability mechanisms are weak”. She refers to the recent disaster where management consulting firm McKinsey signed a huge—what turned out be illegal—contract in South Africa. “If they would have tried to do that in the United States, they would have gone to jail. In an interconnected world, we can’t have businesses applying one set of values in their home countries and another set when they operate in developing countries”, says Ramphele.

“We need a new business model”, Ramphele continues, “We don’t need yesterday’s multinational corporations and big farming conglomerates to deal with the challenges of the 21st century. The idea that bigger is better has been proven to not be true. Economies of scale may be good for a limited group of shareholders, but economies of scale kill competition: they prevent the entry of young people and smaller operations that bring innovation and nimbleness to society”.
Asked for example of the kind of business initiatives the world needs, Ramphele speaks enthusiastically about M-Pesa, that was launched in 2007 in Kenya as mobile phone-based money transfer, financing and microfinancing service, and has quickly grown since to the most successful financial service in the developing world. Today, almost half of the population of Kenya has a M-Pesa account and the service has been successfully launched in Tanzania, Afghanistan, South Africa, and India as well. M-Pesa has been lauded for giving millions of people access to the formal financial system and for reducing crime in otherwise largely cash-based societies. Ramphele: “M-Pesa is outcompeting Western Union that was traditionally used by migrant workers and that charged high fees. M-Pesa’s fees are small and they make money!”
Despite M-Pesa’s inspiring example, change in Africa, in the first place, means change in the rural areas. Sixty percent of Africans live off their farms. With her extensive community development work in South Africa and her experience at the World Bank, Ramphele is very aware of that reality. “If we want to have a sustainable planet, we can’t afford to depend on large farms driven by chemicals. We seem to have forgotten that Africa was the cradle of humanity where carbon farming was perfected long ago. We used carbon as fertilizer. It’s nature ways to recycle and regenerate. We need to pay attention to the lessons of nature and history.”
The focus on nature and farming is also critical to make sure that the needed change includes all. “As long as we have governance and systems of economic activity that leave people behind, we cannot build sustainable societies and we continue to be at risk that populists will rise to power.” There’s a clear line from Jakob Zuma, who was recently forced to resign in South Africa, to Donald Trump, Vladimir Putin and emerging radical leaders in Europe. Ramphele summarizes the message these leaders give their voters: “You’ve got nothing to lose. If you destroy what they have, you’ll feel better and you’ll get your rewards in heaven.”
She calls upon her fellow progressives in the world: “We need to understand that it’s not good enough to say: ‘I’m living in a democracy’. It’s important to ask the question: ‘How good is this democracy? How inclusive is it? Which categories of people may have been left behind? What can I do as a progressive citizen to engage with those who feel left behind and to take away their experience that the whole world has forgotten them’.”
That vital community work for Ramphele used to mean endless days of traveling to faraway hard to reach places. “Today, it’s so much easier to engage”, she says, “thank God, for information technology.” But she quickly adds: “We need to use it more effectively. So far, the populists and the radicals use the new platforms better.” Nonetheless, she voices optimism. “The good news is that there’s only one planet. If we mess it up, it doesn’t matter how many billions you have—they will be of no value. The reality is that we are only going to survive if the rest of humanity can thrive and prosper in a sustainable way as well.”
Her words echo the inspiration of Ubuntu, the African philosophy that teaches: “I am because you are”. Looking forward to her visit to the Zermatt Summit, Ramphele says: “I hope that by coming together and putting our heads together we can strengthen the inner voice that always tells us the right thing to do.” 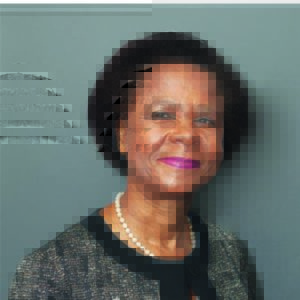 Mamphela Ramphele (Dr.)
Jurriaan Kamp
PrevPrécédentThe example of ants and the business of nature
SuivantDue to the COVID-19 crisis, the 9th edition has been postponed to 17–19 June 2021.Next