How 3D faming creates jobs, income and feeds the world

Entrepreneur and author Gunter Pauli challenges the predominant practice of serving food and energy needs with a two-dimensional model in a three-dimensional world.

“We don’t ask the earth to produce more. We do more with what the earth already produces”. Gunter Pauli’s opening statement puts the conventional model of food and energy production on its head. We live in a reality wherein we ship butter, sugar, palm oil, eggs, milk and dried fruits around the globe to bake cookies that are also shipped around the world so that we can have cookies whenever and wherever we desire, at whatever cost. That oversimplified approach to production in ever-higher volumes has led to a world of hunger and pollution amidst plenty.

“Take Argentina”, says Pauli, a Belgium entrepreneur and author of The Blue Economy, “The country of 40 million people feeds 400 people. It is the most successful producer of soybeans in the world but 25 percent of the population lives in poverty. Isn’t that simply absurd?” Agricultural operations around the world are focused on offering ever-cheaper products with ever-better margins for intermediaries without considering the full impact on the health and the lives of people. Pauli discovered that a Mongolian goat herder earns as much on the sale of a cashmere sweater as Paypal for the transaction…

Modern agriculture is presented as an efficient and productive industry that has shown strongly increasing yields over the past decades mostly driven by chemicals—fertilizers and pesticides. In reality, Pauli argues, agriculture as we know it is a remarkable inefficient venture: “Industrial agriculture focuses on one crop, and from that crop, it focuses on the grain, the kernel, the oil, or the fruit and everything else is considered ‘waste’.” The problem is that we farm in 2D, whereas everything around us—from the forests to the seas—generates biomass, feed and food in 3D. The difference is at least a factor 50. Pauli: “A 3D rainforest produces 500 tons of biomass per hectare per year. The best harvests from our 2D flatland farms yield 10 tons per hectare per year.”

Tea plantations value only the first flush of fermented and dried leaves, from which we derive a drink that ultimately contains 0.1 percent of the biomass harvested. The rest gets, at best, incinerated. “That is the magic ‘solution’ that is listed as ‘energy recycling’”, says Pauli. “Why don’t we call this a massive resource destruction?” The world’s annual coffee harvest is some 210 million tons from nearly 100 countries. The espressos and cappuccinos that we drink contain 0.2 percent of the harvested coffee beans. Pauli: “Extraordinarily, coffee does 100 percent better than tea…” The residues are wasted. The story for cocoa, citrus, palm oil and most other crops is similar. It has been estimated that from the biomass the earth is generously producing, the present economic system hardly ever values more than 10 percent of it, and the average is around 2 to 3 percent.

“The unavoidable result is that we end up with millions of tons of waste. Agricultural waste is never used to generate a penny extra. It is never used to provide more food and fuel,” says Pauli. It is not just that the output is less than it can be—with hunger, malnutrition and shortages as painful results—, it also means that farmers—still most people in developing countries—can’t generate the incomes their families need. Pauli: “How can farmers thrive when the business only values a tiny fraction of their produce? We need to shift the model: drop the core business, go back to life and then ask the question: How does nature do it?”

The prescription is not to go live in a cave or tree again and try to avoid having any environmental impact. No, Pauli sees in nature “pathways to a better, modern future”. Nature has overcome nearly every imaginable challenge over the past millions of years. We should follow the time-tested design principles that nature uses to produce food, cycle water, regenerate soil and ensure that all members of the ecosystem succeed on their evolutionary and symbiotic paths. “Nature has an incredibly efficient business model. There’s no waste in nature, no pollution, and no unemployment. Nature is never concerned about its ‘core business’ or about ‘economies of scale’. Nature respects limits. A tree ‘knows’ that if it gets to 100 feet tall, there’s no point in going to 500 feet.”

Conventional agriculture only ‘sees’ and uses chemistry. Nature operates according to all natural laws including the laws of physics. “We expend massive amounts of energy to overcome gravity—from elevators to water-distribution systems and air-conditioning. We know that apples fall from trees. But we never wonder which laws allow an apple to defy gravity before subjecting itself to it?”, asks Pauli. Natural systems—the seas, the forests, the soil—do not only deliver air, food, and water but also chemicals, minerals, biodiversity, medicine and beauty. Nature continually cascades food nutrition, and matter using a symbiosis of all the members of the “five kingdoms of nature”: bacteria, algae, fungi, plants and animals. Pauli: “All these species acquire and process food differently. They have different ways of procuring, capturing, and processing nutrients and waste. But at one point in time, they all work together, and their differences are essential to overcoming challenges.” A fungus at the root of a tree ensures that the tree gets all the nutrients it needs. The fungus also maintains moisture levels at a tolerable level, even during prolonged droughts. As its reward, the fungus derives its nutrition from the spa of the tree. “It’s an exchange of favors that ensures that everyone strives for a common goal: life thriving”, says Pauli.

Nature’s design principles provide remarkable solutions for complex problems and continually increasing diversity to build up resilience against unexpected disturbances. Nature self-regulates climate, decontamination and mineralization of water, and conversion of residues into food. Nature prevents erosion, maintains soil fertility, pollinates, and balances pests and populations. It maintains life cycles and genetic diversity at productivity levels far beyond any human-made technology. Pauli: “Aircrafts are clumsy structures compared with the efficiency of hummingbirds. And there’s no stronger material than the silk of a spider”.

Pauli calls on entrepreneurs around the world to open their eyes for the enormous opportunities for clean, healthy and sustainable business cycles that nature and natural systems provide. In a business model that’s based only on cutting costs, the entrepreneur is forced to cut corners and to make abstractions of the impact of his business on the life that supports us all. Pauli: “When you see only costs you carry and the profit you make, there’s no place for focusing on generating value wherever you can to respond to the basic needs of all. The overriding objective should be to do more good—for people and planet. It is simply the best business strategy: the more good you can do, the more competitive—and successful—you are!” 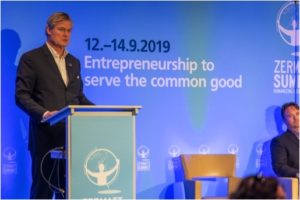 The man who brought back a rainforest