Warrior of the human spirit

Margaret Wheatley: Human experience is the story of perseverance

“Let’s see ourselves as ‘warriors of the human spirit’ ”, says Margaret Wheatley, who just published her new book So Far From Home about “how we ended up in a world that nobody wants”.  And she sees perseverance as the way that these warriors get through.

“I want us to persevere. I want us to be the few people who live by the values that we cherish, who do work that feels right for us to do even if it doesn’t create enormous positive change. I want us to get out of this really destructive belief that if we just work harder, we just network a bit better, we just communicate more, that we are going to shift the direction in which things are trending right now. I don’t for a moment longer believe that we can change this very large, destructive cycle of the systems of politics, business and finance that are quite life destroying.”

Twenty years ago management consultant Margaret Wheatley wrote a book with an optimistic message. If only leaders in government and business had a better understanding of the new discoveries in quantum physics, chaos theory and biology, they would lead their organizations in a different—and more successful—way. Leadership and the New Science became a bestseller. “I thought that all you had to do was to show people that there was another, more effective, way and that they then would choose the better idea. Well, I have since learned that good ideas don’t change people’s minds.”

From the same scientific perspectives she now sees the dominant global culture of greed and injustice as an “emerging phenomenon”. The world we live in was not anyone’s plan. It is a self-organizing result of the interactions of many decisions and initiatives. Wheatley: “You can never change emerging phenomena by working within them. You change by starting over.”

Hence her call for persevering warriors.

We are sitting on the deck of her wooden chalet in the sandstone-mountains of Utah, on the land that Robert Redford once rescued from developers. Wheatley moved here with her family eighteen years ago—a move she never regretted. Below in the garden a buck deer is grazing in a bed of weeds. With a characteristic big smile Wheatley cheers him on: “I want those to be eaten, that saves me work.”

Peppermint tea is served with delicious peaches and oatmeal cookies. Buddhist prayer bells chime softly in the warm summer breeze. Buddhist philosophy with its focus on accepting reality as is and live forwardly from there, has clearly influenced her thinking. Wheatley spends substantial time with her Tibetan teacher each year. She still travels the world to advise companies, governments and organizations, like she has done for three decades, always to return to her sanctuary tucked away in the wilderness. It is part of the recipe of her own perseverance.

In 2010 Wheatley wrote an inspiring little ‘manual’ for perseverance. “Human experience is the story of perseverance. Throughout space and time, humans have always persevered. We wouldn’t be here without them,” she wrote. When she teaches on the topic she always begins with asking the audience about people in their own lineage who have persevered. In every family there’s grandparents who immigrated and built new lives. Or mothers who were able to raise a family on their own while working several jobs. Wheatley: “We all stand on strong shoulders. And now it is our turn to serve the world. No big deal—except for those in the western world who were brought up in a time when the skies were the limit. Failure, setbacks, losing your way, were not part of the scenario’s many of us were brought up in. Yet all other traditions talk of cycles that include destruction. Human beings have persevered throughout history.”

According to Wheatley perseverance begins with what she calls “right work”. “My own experience has taught me that if I give up any hope of saving the greater system, I actually find the energy to do the work that I feel, is mine to do.

I’m just doing this work because it is my work and because it honors my values and it embodies my integrity. I’m not doing it because I hope to influence something at a larger scale any longer. It is a long-term commitment that is not attached to any outcome.” She encourages others to do the same. To do work that embodies the values that are going against the current culture. “I would like to see more human beings exhibit our best human qualities—generosity, intelligence and compassion instead of all this narcism, self protection and creating enemies if anyone opposes you. And bring those qualities to your child’s school, your local community, or your team within a larger organization…and let that be sufficient”, she says.

It is a fine line: Letting go of the hope or promise of change doesn’t mean accepting the values of the current culture. Wheatley: “We should hold on to the realization that it doesn’t have to be this way. There are other ways for human beings to live and relate. And there are other sources of happiness and wellbeing. As we persevere we never go along and become complacent that this is the way it is.”

She tells the story of Larry Gibson, a famous activist who fought mountaintop removal for mining in West Virginia and who recently died. Gibson stood up against powerful business interests and was chased and challenged only to continue his mission. As a true warrior of the human spirit, Wheatley says, he exhibited the first condition of perseverance: to never fall victim to fear or anxiety. “I never accepted the destruction of mountains”, Gibson said in an interview. Wheatley: “Perseverance is a conscious choice that we are willing to stay in the fray of things in the great swirling negative dynamics—when we encounter anger, or stupidity or when we encounter people destroying great work with the stroke of a pen.”

She is inspired by the Chinese character for perseverance—which is often the same as the one used for patience. The symbol shows a knife over a heart. Wheatley: “Any moment the knife can fall. So it is a path of danger but you are led by your heart, by your desire to do good, to serve and to care about people. At the same time the work we persevere in, cuts our hearts open so that we experience more and more tenderness and compassion for others.”

People who persevere depend on very strong relationships with companions. “We absolutely need to be together in this. You cannot do it alone. You need companions for the journey. These aren’t just friends. These are people you van call on any time.” Wheatley is moved by the story she was once told at a US army headquarter about the American civil war. General William Sherman who won the war for the North, wrote a letter to General, and later president, Ulysses Grant describing the reasons for their victory. Sherman wrote: “I always knew you thought of me and that if I got in a tight place, you would come, if alive.”

It is a touching story that resonates with my experiences as an entrepreneur. My thoughts go back to the early days of, then, Ode Magazine, when there was no guarantee that there would be any audience for our optimistic, solutions-oriented reporting. In these days I always felt that my grandmother, then in her mid-eighties, would come and rescue me if it all went wrong. She is no longer here, but her support is still with me.

The essence of Wheatley’s message about perseverance is that “it is not just me”. That’s why she advocates that any persevering ‘warrior of the human spirit’ needs to practice mindfulness. “It is about getting in touch with the sacred, with the experience that things are far beyond your little ego. There are other forces and dynamics and you are participating in something much greater. You need to tune into that through meditation. You need to be able to see and discern clearly. You have to be very awake.”

Reflection and discernment are also critical to know whether you still have the opportunity to move something forward, Wheatley says. There are times when you cannot get through no matter how hard you push. “You have to know whether you are in a situation that is destroying your self concept or your capacity. That’s why mindfulness practice is so important. People who persevere are not stupid. They are not blindly spending all their energy. They make the current situation work for them. They survive the current situation because they know they are in a long term process.”

Wheatley’s final ingredient for perseverance is regular—non-spiritual—practices that bring peace and contentment. Hiking in the woods, gardening, spending time with friends. “You have to do such things much more frequently because the pressures are so much stronger.”

It’s that contentment that Wheatley radiates. The activism that propelled her in the past has been replaced by an even deeper commitment to do what’s right no matter what. Her own practices have brought her peace of mind in an “insane world”. Yet her eyes still shine with passion as she tells about her friend and perseverance-companion who is CEO of a large non-profit organization. Three years ago the friend was working on hurricane relief. And as she sat frustrated in a meeting with government officials where the bureaucracy seemed unable to respond to people’s urgent needs, she sent the text that provoked Margaret Wheatley to write her book on perseverance: ‘Every day I make a decision not to give up.’

Meg’s newest work is
The Warrior’s Songline: A Journey Guided By Voice And Sound,
a CD and accompanying book.
Listen here. 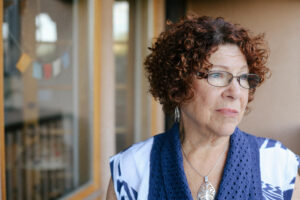