‘Lifi: Communication at the speed of light’ with Suat Topsu

In 1880—four years after he had invented the telephone—Alexander Graham Bell made another invention that he himself considered his greatest. Today, almost 140 years later, that invention stands to change the Internet and the online world that we know in profound ways.


On June 3, 1880, in Washington, D.C., Bell communicated with his assistant Charles Sumner Tainter over a 700 feet distance from the roof of the Franklin School on Franklin Square to Bell’s laboratory in L Street using modulated sunlight—instead of modulated electricity—as a means of wireless communication of sound. Shortly before his death in 1892, Bell said in an interview that the photophone was “the greatest invention I have ever made, greater than the telephone”.

Nonetheless, today, we don’t use photophones. Sunlight was not a reliable source for communication. Clouds interfere and it is not possible to communicate at night. When Bell introduced his photophone, electric light had just been introduced. But that light was not strong enough—the frequency was too low—to transmit information.

We might have never heard of photophones anymore if, one day in Paris, Suat Topsu had not listened to his wife. In 2005, as a young professor of quantum physics at the University of Versailles in France, Topsu was involved with autonomous vehicle experiments using the LED lights of cars for inter-vehicle communication. He discovered that cars could “talk” to each other through their headlamps and brake lights. One day, Topsu came home and his wife, who was pregnant with their third child at the time, told him about a French television documentary on the dangers of radio waves. In response, Sara Topsu decided that the Wi-Fi in their home had to be switched off to protect their new baby’s health. “It was a drama for me,” Suat recalls. “I needed to work on my computer every day.”

Suat initially tried to convince his wife that radio waves were not as dangerous as the documentary had argued. He had studied a report of the World Health Organization (WHO) on the effects of radio waves on living organisms, based on thousands of scientific studies. Unfortunately, the report stated that pregnant women and their babies were particularly susceptible to prolonged exposure to radio waves. Sara was not amused. “You’re a researcher,” she told him. “Find another solution.”

Installing cables throughout their home seemed a complex, expensive, and time-consuming solution. Instead, Suat went to his lab to return to his autonomous car research. His scientific mind was stimulated—why wasn’t there a better way to communicate with no health risks? He dove into the history of communication and he found Graham Bell’s work on his photophone. Topsu read why the invention had never become a success and he realized that—with LED light—he would be able to do what Bell could not in his day.

LED is cold light produced by a microprocessor that makes light at high-speed—like the sun. It was possible to multiply the speed of the blinking of light to 100 million times per second (100 MHz), meaning that enormous amounts of information could be transmitted even faster, at the speed of light, which is invisible to the human eye. LiFi was born and the problem of Suat Topsu’s wife could be solved.

LiFi is a game-changing technology and has been embraced by France’s new president Emmanuel Macron as a spearhead of French innovation. Test LiFi networks have been installed in a hospital in Perpignan, in museums in Belgium and France, in French supermarkets, and in a Paris metro station. The Paris metro has committed to install LiFi networks in all 245 stations. Aircraft manufacturer Airbus and leading French automakers were present at the first Global LiFi Conference in Paris in February.

LiFi has many advantages. The radiowave-based 5G cellphone network promises an Internet speed of 100 megabits per second by 2020. LiFi communication through a combination of optic fiber networks and LED lights at the speed of light is 250 times faster. WiFi and the current 3 and 4G networks go through walls. That means the communication can be hacked. A LiFi connection only works in the light beam of the LED lamp. The light does not go through walls. If you want to hack LiFi, you need to stand next to the user…

Light does not go through our bodies either. Radiowave-based communication, however, is suspected to have a negative impact on our health. That is why the World Health Organization (WHO) advises a maximum exposure to radiowaves of 620 milliVolts per meter. Light can provide communication where sound can’t go: in mines and tunnels. LiFi can guide blind people through underground transportation systems and makes it possible to communicate with trapped miners in case of an incident!

LiFi also offers very exact geolocation. Today, we regularly walk in the wrong direction searching for a restaurant because the GPS technology can easily be 30 feet off and it takes time to determine where we are. Communication with a street light at the speed of light makes it possible to determine someone’s location instantly and within inches. That means, for instance, that LiFi can smoothly and efficiently lead you through the aisles of a supermarket once you have put your shopping list in your phone: you will never come home any longer without the product you couldn’t find (research shows that supermarkets lose on average 4 percent sales because people can’t find products they want to buy).

Aircraft manufacturers can replace the heavy copper wires that connect the video screens in planes with LiFi enabled LED lights that are already installed above every seat. The technology benefits of LiFi are huge, but perhaps the most important contribution is that the introduction of LiFi offers a chance to do the Internet all over again. Light networks are owned by governments. Note: the networks exist; the introduction of LiFi does not require massive infrastructural investments in cables, cell phone towers et cetera. We merely need to replace the light bulbs with new LED ones that come with very substantial energy savings that basically pay for the replacement. LiFi also allows developing countries to leapfrog and catch up. They don’t need billions of dollars to invest in optic fiber cables and cellphone towers. Instead, they can provide high-speed Internet using simple ADSL technology everywhere where their electricity networks reach. Even our current phones are ready with their cameras and LED-lit screens for LiFi.

In many countries governments have given licenses to private companies to operate the light and electricity networks. If the same networks are going to be used for data communication, these licenses will have to be renewed. Creating a new communication network presents an opportunity comes to set new rules, for instance, about the ownership of data to protect citizens and to serve society. A new network that cannot and will not be dominated by Google and Facebook. Inventor Buckminster Fuller once noted: “You never change things by fighting the existing reality. To change something, build a new model that makes the existing model obsolete.”

LiFi won’t work everywhere—it needs electric LED light. That means there’s no LiFi on the beach or in the mountains. For these places, soundwave based communication will remain the primary medium. However, given the great benefits of the technology for the urban environments where most people work and live, LiFi will come fast. The introduction allows us to have the conversation we should have had 25 years ago when the Internet was born: what will be rules of communication? We can put rules in place before smart entrepreneurs will be able to dominate the new network. We can make sure that “search” can be a neutral service that doesn’t need to be controlled by a private company. We can make sure that on the LiFi network we, the users, determine with whom we want to share information and to who we sell our data—and for what price. LiFi allows us to go beyond the Internet of Things—controlled by private companies—to the Internet of People that was the original democratic ideal of the Internet pioneers. 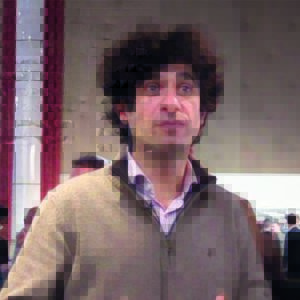