In recent months—inspired by Sir David Attenborough’s Blue Planet II—the widespread problem of plastic pollution has suddenly prompted some bold action. The story of the first supermarket with a “plastic free isle” in the Netherlands went viral and inspired consumers across the globe to demand similar initiatives in their countries. In the United Kingdom, Queen Elizabeth in a high-profile decision banned plastic straws and bottles from all royal estates. Then a group of 40 major British companies—including Nestlé and Coca-Cola—pledged in the “UK Plastics Pact” to eradicate single-use plastics from their packaging by 2025 and Indian prime minister Narendra Modi went even further promising a ban on single-use plastics in his whole country in 2022.


All good news because plastic is bad and we need to get rid of it. Or, so we think when we see the terrible pictures of a dead whale on a beach with a body full of plastic waste. Consequently, it comes as a surprise when Catia Bastioli, the CEO of the Italian company Novamont, a world leader in bioplastics, praises plastic: “We need plastics. We should not forget that plastics give a big improvement to our quality of life”. Point taken. It’s hard to imagine windmills—that produce clean energy—, and lighter cars and aircraft—that are more fuel-efficient—without plastics.

Bastioli: “Plastic has fantastic performances”. The problem is that, in many cases, we only use it for a very short time and then we throw it away causing widespread pollution. Every second 20,000 new plastic bottles are produced around the world. Global plastic production has crossed 300 million tons per year and is scheduled to hit one billion tons per year in the next 25 years. This is a trend that—despite the admirable initiatives of queens, prime ministers and businesses—can hardly be stopped. That is why Bastioli wants to re-direct the debate. Rather than banning plastics, we should lengthen their lives and embed their use in well-designed policies. “We need to engineer the end of life of plastic products before we introduce them in the market”, Bastioli says.

Her vision echoes a recent European Union initiative. In January 2018, the EU adopted the first-ever European Strategy for Plastics in a Circular Economy. It is a strategy planned around better design, and better-quality recycling at higher rates. The EU aims for a “resilient” plastics industry. That’s the kind of language and thinking that Bastioli likes. “We have been hearing about recycling for more than two decades and, frankly, the problem is only getting worse”, she says. The production has been more focused on improving use and performance through combinations and multiple layers of different plastics and metals than on how to create a circular plastic economy.

Biodegradability is presented as the ultimate sustainable response to the consumption of plastics. Over the past 25 years, Novamont has pioneered biodegradable and compostable bioplastics. The company has created a line of proprietary plastics—Mater-Bi—using starches, cellulose, and vegetable oils. The properties and characteristics of Mater-Bi are similar to conventional plastics but at the same time they are fully biodegradable and compostable. The biopolymers are suited for the processing technologies for traditional plastics: film blowing, casting, thermoforming and injection molding. That means that the plastic bag that you use for your grocery shopping and the “silverware” you use for your takeout lunch can be made from Novamont biodegradable plastic. The plastic comes from renewable agricultural resources, it reduces greenhouse emissions and the consumption of fossil fuels. Ultimately, the raw materials return to the earth through biodegradation and composting.

Bastioli, however, sees only a partial solution in the biodegradable plastics. “It works if you buy fruits and vegetables in a store and take them home in a compostable bag. After you have made your salad you can collect the peels and the waste in the bag and generate healthy humus for your plants. Both peels and plastic bag are biodegradable and ready for composting.” However, water bottles—for example—are already recyclable and biodegradability would not bring any advantage. “It’s best when we drink tap water”, adds Bastioli. But if we do use water bottles, they should be designed to be recycled.

Most concerns about plastic pollution focus on the impact on the oceans. But 80 percent of the plastic that ends up in the seas comes from land. That’s where Bastioli sees an even bigger problem. The misuse of plastics degrades the top soil. She gives the example of the black films that are used in agriculture to protect crops from pests and weeds. “That’s good because it reduces the need for herbicides and pesticides”. But films must be thick and resistant because thin plastic films break down in particles that are not decomposed by organisms in the soil. The micro-particles are not absorbed by the environment. The soil gets polluted and yields go down. Bastioli: “Pollution must be prevented at land, by using proper eco-design, good collection schemes, and sound waste recovery.”

Only a complete re-design of society can solve the problem of plastic pollution, Bastioli argues. She has her roots in systems thinking and was inspired by Belgium Nobel laureate, Ilya Prigogine, who showed that irreversible processes lead to catastrophic effects. “The problem is that we don’t understand that natural systems have flows and stocks built over millions of years. In nature, the flows at entrance and at exit are in balance. Our linear processes disturb the natural balance of the system”, she says. Creating a circular economy based on natural systems requires a local community focus. The process of globalization with companies and factories traveling the globe ever-searching for lower costs is—in Bastioli’s view—creating the core of the pollution trouble. “We need to rediscover the complexity of the world we are living in.”

The urgency of the pollution challenge ultimately makes Bastioli hopeful. She notes that in the past century we have transformed ourselves from producers to consumers. “We used to take pride in what we made. Today, we only feel alive when we consume.” It’s not a very effective strategy with depression and alienation increasing as communities break down. “If we begin to re-design society based on natural systems, we can rebuild communities. We can work and create together again. People will speak again to each other because they need each other.” 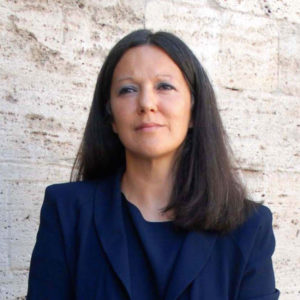